The island of Koutali in Marmara Sea 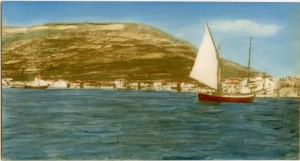 The islet of Koutali lies in Propontis, northwest of Kyziki Peninsula, in the Sea of Marmara. It belongs to a group of islands, called the islands of Marmara. Distances among the islands are very small and because of this it seems that communication was so frequent resulting in forming a common social and economic community. The high homogeneity of the population has been one of the contributing factors. Before the Asia Minor disaster (1922), the population consisted of 28,500 Greeks, 1,200 Turks and 300 Jews.

The islet of Koutali has a long shape with a total length of 3.5 km and a width of approximately one kilometer. The coast of Koutali is relatively steep. At the western end of the island there is the highest peak of Prophet Ilias, which is about 150 meters. The rest of the territory forms a low ridge which expands in a way that it seems like an inverted spoon resting upon the sea. At the exact point where the “spoon handle” joins the “head” lies the only settlement on the island, the homonymous village of Koutali.

There is limited historical data for both the origin of the name of the island and about life and human activity on the island from antiquity until the 19th century. The first official record of the name is at the end of the 17th century by the geographer Meletios the Athenian, who among other things said that at that time the island was “inhabited”. At first Koutali was a part of the Byzantine and then of the Ottoman Empire and its inhabitants were mainly Christians and Muslims. In addition, the island was conquered by Catalan pirates and then it was inhabited by Cretans, who travelled to Istanbul in order to give assistance during the siege of Constantinople by Mohammed II.. It was also inhabited by refugees from various Aegean islands, such as Andros, Psara, Skopelos and Chios, a fact that contributed to the prosperity of navigation on the island.

Despite its small size, the island of Koutali prospered, resulting in an intellectual and cultural development, similar to that of important European centers of the 18th and 19th century.

The prosperity was due to sailboat shipping, which was the strongest factor of wealth for Koutali from the 19th century to the early 20th century until World War II. During the time of prosper of merchant shipping, the only village on the island, with a population of 2,685 residents, enjoyed a booming economy, with its inhabitants having merchant shipping, fishing and all the other relating activities as their exclusive occupations. The island had well – built mansions, churches, schools and civic buildings, such as the Association “The Annunciation”, a boys ‘school and a girls’ school. Many people of science, literature and arts, clergy, teachers, writers, doctors, scholars, bankers and merchants, with significant activity in the 18th and 19th centuries, come from this small island.

The mansions of the famous ship owners from Koutali, such as the Blastos family, the Zaharofs, the Fotiadis and other families, were legendary for their wealth and for the famous “saraia”, which means the three-storey, high-ceiling houses built by Italian architects and painters, who came to the island for this purpose. A lot of the furniture and equipment of public buildings, churches and houses came from Western Europe and Russia, proving once again the prosperity and the wealth of this small maritime society in Propontis of the Marmara Sea.