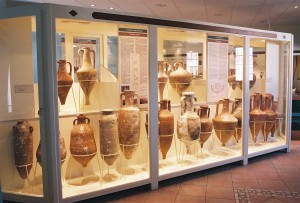 The Koutali sponge – divers pulled out from the seabed not only sponges but also various objects from ancient or newer shipwrecks. People showed a unique sensitivity on the value of these ancient objects and entrusted them to Mr. John Alevropoulous, the headmaster of the Primary School, having the intention of establishing a museum which would present the “treasures” that they had pulled from the seabed, risking their lives. In 1963, aiming at the creation of this museum, the Primary School of Nea Koutali managed to acquire the authorisation to create a collection of antiquities.

The archaeological collection includes 106 registered archaeological discoveries from the seabed, mainly amphorae of many different types and origins. These amphorae date back from ancient to recent times and they are usually large vessels suitable for transporting commodities (oil, wine, salted fish, etc.) on ships. For the safe transfer of their contents, amphorae were sealed with clay caps, while their lower part had a pointed apex, enabling the storage of numerous of them in the holds of ships: the amphorae were placed upright in two or three rows so as for the apexes of the amphorae of the second row to fit in the gaps left by the amphorae of the first row. In this way the entire interior of the boat was usable, while at the same time the cargo was safe without being displaced during the journey.

The name “amphora” comes from the fact that the particular vessel could be carried by its two handles (“amfi – fero”, meaning in ancient greek both – carry). The different shapes are characteristic of their different origin and of the type of exported products. They often had stamps in their handles, indicating the name of the archon at that time and thus the bottling date of the wine, the ceramicist and the region of origin (“THASION” from the island of Thasos, “PARION” from the island of Paros) or only initials such as ΣΑ (Samos), ΚΟ (Kos). A characteristic symbol of the region often exists, such as the rose or the sun for Rhodians, Hercules with his arch and the dolphin for Thasos and the sphinx sitting behind the amphora or a simple amphora for the island of Chios.

The study of these ancient amphorae provides information on the cities and regions of productions, the sea routes and the development of shipping. They are drinking vessels, as they were used for serving wine, the main drink of ancient people. The use of “commercial amphorae” has been documented since the Early Bronze Age (3rd millennium). Since then and until the Byzantine period millions of amphorae in a wide variety of forms and sizes had been made, as they were the main type of containers used to transport goods. During the last centuries of Byzantium they were gradually replaced by a wooden barrel, called “voutsion”.

Although the archaeological collection may seem to be consisted of heterogeneous findings at first sight, its presentation based on the origin of the objects highlights the intense commercial communication that existed in the Eastern Mediterranean since ancient times. It also demonstrates the course which the sponge – fishers have been following every year until today, so as to collect the sponges (Aegean, Cyprus, Egypt, Libya, Tunisia, Sicily, southern Italy, Ionian Sea, Aegean Sea).