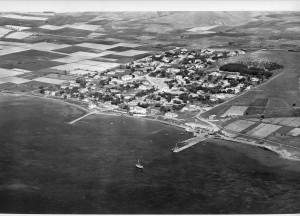 After the Asia Minor destruction, in accordance with the terms of the Treaty of Lausanne (1923), the islanders of Koutali were considered to be changeable and were forced to migrate as refugees. So in the autumn of 1922, the inhabitants left their home mostly by boats to search for a new location to settle down in Greece. Many of them came to Limnos, where they settled in refugee settlements.

Limnos was chosen firstly because the sponge – divers from Koutali dived every year on the reefs around the island, as they were all well aware of the sea and, secondly, because they found similarities between Koutali and Nea Koutali in terms of geomorphology, colors and smells, having already acquired relationships with the inhabitants of Limnos. The village of Nea Koutali was built after 1926 at a place called Agia Marina, where most of the refugees settled down. It has a modern street layout and rows of trees. It is also known for the flower gardens of the houses. In 1928, Nea Koutali had 351 inhabitants, while in the following decade until 1938 500 people lived in the village and 70 two-dwelling buildings were built. In 1947, twenty years after the first settlement of the refugee populations, the community of Nea Koutali was established.