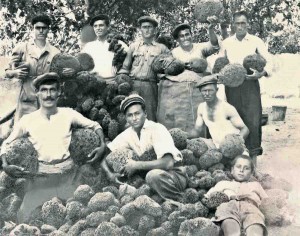 The residents of Nea Koutali continued the tradition they brought from their island and most of them were sailors, captains, fishermen and sponge – divers. In 1938 there were four diesel commercial vessels in Nea Koutali, three sailing boats and passenger boats with daily transport to Moudros, as there were 160 sails annually from the small port of Nea Koutali.

Sponge – fishing was the main occupation of people from Koutali in Limnos, their new homeland. They developed an important sponge – diving fleet and worked only with motor boats (“trehandiria”, specially designed to have an air pump and support scuba divers). According to a census in 1948, people from Koutali in Limnos had 15 sponge – diving boats, 50 divers and they annually exported 700 kilos of sponges earning 4 million drachmas. So they were second in Greece after Kalymnos, which had 35 motor boats. From 1963 to 1970 there had been a state diving school in Nea Koutali which gave diplomas for divers, supervisors of diving and captains for sponge – diving boats. In the early 1970s the fleet of the Koutali islanders increased even more: with 35 sponge – diving boats they continued to travel in the Mediterranean until about the end of the 1980s, diving in order to find sponges and dealing with trade. As a result they played an important role in the development of Greek sponge – fishing.