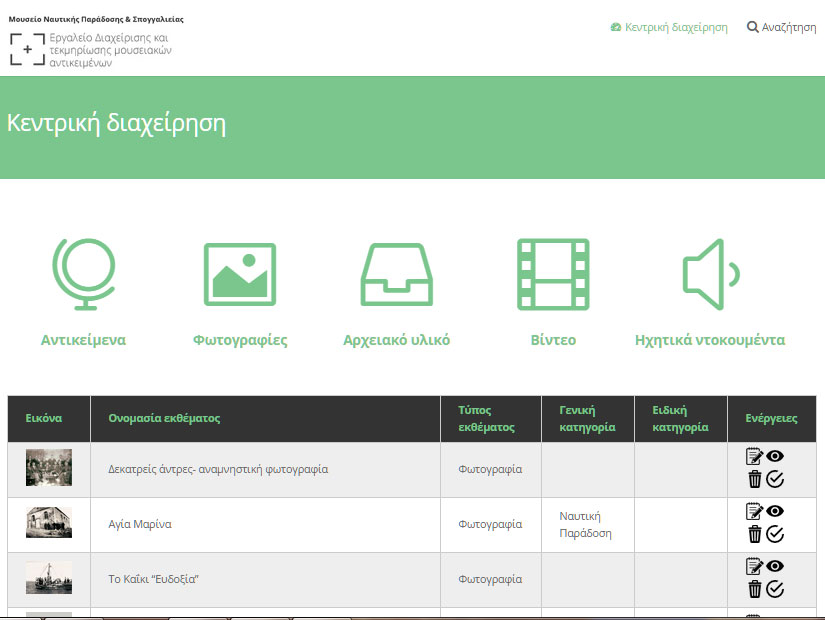 The cultural material of the “Museum of Maritime Tradition and Sponge – Fishing of Nea Koutali” was initially registered in records that were written during the preparation of the first exhibition in 2004-2005. This material, however, had been prepared to meet the needs of the planned exhibition of the museum, and was not planned to fulfill the needs of a systematically museological classification. Also it was not supported with the necessary visual material and the exhibits have not been digitized. In addition, after the opening of the exhibition (June 2006) the museum’s collection has been enriched with important new exhibits which were not classified and of course they were not documented or digitized. So there was a significant need for a complete digitization and documentation of the museum’s exhibits.

The total amount of documented and digitized museum objects reached the number of 327 exhibits, of which 168 objects, 111 photographic documents, and 48 historical documents (books, nautical documents, other material).

An integrated electronic web based system for the documentation, cataloging and management of museum material.

After the completion of the digitization and the documentation of all the exhibits, Aegean Solutions S.A. designed and implemented an integrated electronic web based system for the documentation, cataloging and management of the museum material.

The system that was designed and implemented includes the following functions:

The system will aid “Museum of Maritime Tradition and Sponge – Fishing of Nea Koutali» at the implementation of any research, documentation and exhibition project that will be planned in the future.

*   The system will be subject to continuous improvements and changes.
** Entering to the system requires authorization by the system administrator.